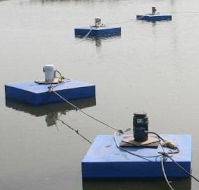 Schaus-Vorhies Companies serve many industries in a variety of ways. In each of our companies, we are committed to making use of the best available technologies to provide the highest quality and most cost-efficient services to our clients. Whether it’s Paint-Line and it’s Industrial Powder Coating methods for painting industrial equipment or Schaus-Vorhies Kleaning and the sand fluidized heat beds used to clean industrial equipment, so thoroughly you could eat off it, we are at the frontline, implementing the latest and greatest technology and techniques to provide the best results to our clients.

Another excellent example of this commitment in action is Schaus-Vorhies Water Treatment (SVW). At SVW, we make use of the new and incredibly efficient micro bubble diffusion method to treat water in a variety of applications, from septic tanks to aquaculture. Before we discuss exactly what micro bubble diffusion is, we should take a look at why we need it.

Every industry produces some waste. That waste might be commercial waste that is harmful to the environment, large amounts of animal waste as in livestock farms, oil and grease at manufacturing facilities, fertilizers at farms, and more. Searching for ways to deal with this waste beyond letting it collect in ponds or just dumping it into rivers, it was discovered that bacteria could consume and breakdown most forms of waste, turning them into byproducts far less hazardous. The problem was that these bacteria needed oxygen to grow and to process the waste. Most waste collection is done in stagnant ponds or man-made pools, meaning that they have very little oxygen in them. No oxygen meant no bacteria, which meant no waste getting processed.

The first widely used solution was to simply pump air into the waste ponds using compressors and pumps large enough to get enough air into the system to grow the bacteria with enough force to overcome the water pressure. The air is fed through a diffuser (usually some kind of fine mesh screen or a fan), which breaks it up into many bubbles that then pop and introduce air (and the oxygen that goes with it) into the system. This system works, but it has significant problems. First, the compressors and pumps involved can be very large, which means they take up valuable space in your facility, use a lot of electricity, and require frequent maintenance to keep them in running order. In short, this positive pressure method of introducing oxygen into waste systems is expensive. Second, it is incredibly inefficient. Because the bubbles are relatively large (3-4 millimeters), the vast majority of them float to the surface instead of popping in solution, meaning that most of the bacteria-friendly oxygen just pass through the system and out into the air.

Fortunately, SVW has a better way. Micro-bubble diffusion’s secret is in the name. This method produces much smaller bubbles, bubbles that don’t have enough buoyancy to make it to the surface, meaning that almost all of them pop in the water, keeping the oxygen where you want it – in the system growing bacteria to breakdown your waste. This leads to an oxygen transfer efficiency of about 80%, much greater than the less than 6% efficiency of the positive pressure method.

Okay, it’s more efficient at getting oxygen into the system and keeping it there, but what about energy use? Does the micro-bubble diffusion method use more energy than the positive pressure method? No. In fact, it uses far, far less.

Micro-bubble diffusion works by bringing wastewater from below up to the surface, which breaks the surface tension. With the surface tension broken, the water will now absorb the air. This process results in millions of tiny bubbles of approximately 0.025 millimeters each. Those bubbles then naturally move from their place of high concentration near the surface to spread out evenly through the water, where most of them remain until popping or merely dissolving into the solution. To introduce 400lbs of oxygen into a system every day requires only a tiny 2hp motor. Doing the same thing with the older, positive pressure method takes at least five different machines adding up to a minimum of 33hp.

With an oxygen transfer efficiency 13 times greater than the older method and using only a fraction of the energy, SVW’s micro-bubble diffusion units can reduce client operating costs by as much as 70%. Contact us, and we can get you set up with our cost-efficient and easy to run units and start saving you money very soon.

Schaus-Vorhies management staff were professional, communicated well, and responded quickly to phone calls and emails.They participated in a productive pre-planning meeting on site and worked closely with other subcontractors to schedule their work. They were also very safety conscious and took the appropriate steps to protect the building slab from any damage during the steel erection.I would not hesitate to use them on another project.
–Andy Buessing, Hutton Construction